Implementing screening assays that identify functional and structural cardiotoxicity earlier in the drug development pipeline has the potential to improve safety and the cost and time required to bring new drugs to market. In this study, a metabolic biomarker-based assay was developed that predicts the cardiotoxicity potential of a drug based on changes in the metabolism and viability of human induced pluripotent stem cell-derived cardiomyocytes (hiPSC-CM). Assay development and testing was conducted in two phases: (1) biomarker identification and (2) targeted assay development. In the first phase, metabolomic data from hiPSC-CM spent media following exposure to 66 drugs was used to identify biomarkers that identified both functional and structural cardiotoxicants. Four metabolites that represent different metabolic pathways (arachidonic acid, lactic acid, 2’-deoxycytidine, and thymidine) were identified as indicators of cardiotoxicity. In phase two, a targeted, exposure-based biomarker assay was developed that measured these metabolites and hiPSC-CM viability across an eight-point concentration curve. Metabolite-specific predictive thresholds for identifying the cardiotoxicity potential of a drug were established and optimized for balanced accuracy or sensitivity. When predictive thresholds were optimized for balanced accuracy, the assay predicted the cardiotoxicity potential of 81 drugs with 86% balanced accuracy, 83% sensitivity, and 90% specificity. Alternatively, optimizing the thresholds for sensitivity yields a balanced accuracy of 85%, 90% sensitivity, and 79% specificity. This new hiPSC-CM-based assay provides a paradigm that can identify structural and functional cardiotoxic drugs that could be used in conjunction with other endpoints to provide a more comprehensive evaluation of a drug’s cardiotoxicity potential. 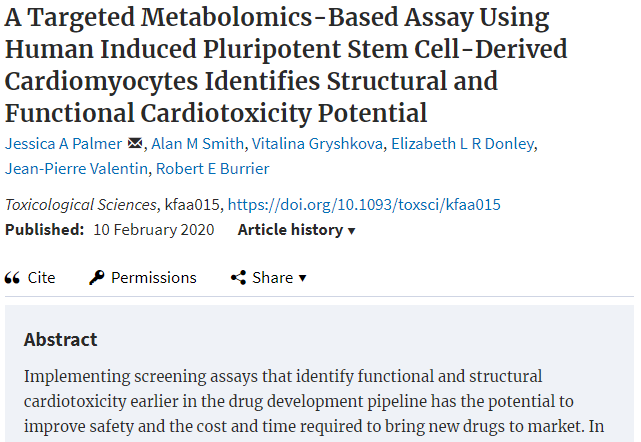